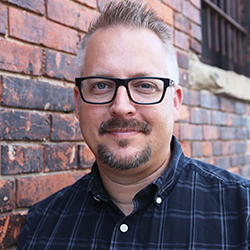 John’s folks moved his brothers and sister to Lincoln in 1984 and he’s been here ever since. John loves Lincoln and a lot of his interests as a kid were realized here, including working in radio and being a musician. But, most importantly he met his wife in Lincoln.

John Jr. started playing drums at the age of 13 and has never turned down a chance to pick up the sticks and let loose. For a short while, he pursued a career as a professional musician, but then…of all things, radio got in the way! You can catch John and his buddies in AM/FM performing around town playing all their favorites from the 80’s.

When he’s not in the studio, he enjoys cycling, golf and whatever fun he, his wife and their three kids can find.