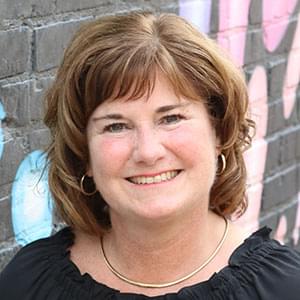 Gina Sherwood Klein joined the B107.3 Morning Show in 2003. With no experience under her belt this Lincoln native dug her heals in and knew she had a big task ahead of her. Gina won an hour on the radio at a high school booster club auction and got her face and voice in front of the management team at Broadcast House.

She has always been a morning person, so the job was a perfect fit.

Gina is married and has two stepchildren and four step grandchildren. In her spare time she enjoys gardening, cooking, shopping, traveling and spending time with family and friends. She is a big fan of The Voice, Ellen, Big Bang Theory, Empire and Dancing with the Stars. She never misses an awards show and loves the pomp and circumstance of the red carpet!

Gina is a graduate of Lincoln Southeast High School and the University of Nebraska where she earned a Bachelor of Science degree in Education.

Gina is also a civic volunteer. She has worked with many organizations in the Lincoln community: The Juvenile Diabetes Research Foundation, The Make A Wish Foundation, The American Cancer Society, Special Olympics of Nebraska, The Friendship Home, Heartland Big Brothers/Big Sisters, Tour De Lincoln, YWCA Star Art project, Lincoln Children’s Museum and Uncle Sam Jam. Gina is also a past chair of the Star City Holiday Parade and assisted the 10/11 production team to add “color” commentary” to the parade’s television broadcast.

What’s In A Name?

This morning on the morning show Joe and I talked about baby names that are on track to be the most popular for boys and girls in the next ten years. The website is bounty.com (I’ve listed the website link below.). For boys: Chester, Levi Hudson, Eddie and Myles. For Girls: Nellie, Elodie, Anastasia, Margo…… END_OF_DOCUMENT_TOKEN_TO_BE_REPLACED

At the beginning of the year I watch the Netflix series “The Queen’s Gambit.” Yes, it is all about chess. It’s earned two Golden Globe nominations and in its first month of airing achieved 62 million streams. The lead character is a girl who is raised in an orphanage and becomes a chess prodigy. I…… END_OF_DOCUMENT_TOKEN_TO_BE_REPLACED

Apparently, this is now a thing and your kids will love it. There is now a Kellogg’s cereal named after the Baby Shark song. You know that song that your child keeps asking to replay over and over again. The cereal is fruity (berry) flavored. The shape is unfortunately not little sharks but colorful rings with colorful…… END_OF_DOCUMENT_TOKEN_TO_BE_REPLACED

“Snow Moon” To Light Up The Sky

Last week it was the Mars rover landing on the red planet – in a few days, it’ll be another cool out-of-this-world sight to see. The “Snow Moon” will occur on Friday evening (2/26) through Saturday morning (2/27) Both Native and colonial Americans gave nicknames to each of the year’s full moons, usually based on the…… END_OF_DOCUMENT_TOKEN_TO_BE_REPLACED

Celebrity Dating Game In The Works

This could be fun! Singer Michael Bolton and actress Zooey Deschanel have been picked to host a new show on ABC. Celebrity Dating Game will have a fresh take on the dating show format that you may remember. The original Dating Game with host Jim Lange ran from 1965-1973. This new show will be more…… END_OF_DOCUMENT_TOKEN_TO_BE_REPLACED

“The Rock” For President?

In our B Entertainment Buzz segment today on the morning show, Joe and I talked about Dwayne “The Rock” Johnson considering a run for president in the future. In a recent interview about his new sitcom, “Young Rock.” Johnson said “If that’s what the people wanted,” he would give a presidential run a go. As the topic…… END_OF_DOCUMENT_TOKEN_TO_BE_REPLACED