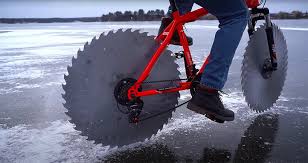 There’s a fine line between genius and insanity. Take, for instance, this engineer guy who goes by the name “The Q”. He puts together wacky inventions for YouTube. Recently, he wanted to be able to ride a bike in this cold weather across a lake. So he built “The Ice Cycle”. It’s a bike with saw blades instead of tires. He literally took a mountain bike, replaced the wheels with giant, homemade saw blades, and hit the ice. But it cut right through the lake ice surface. That was attempt number one. For number two, he added some metal ridges between the blade teeth to make them cut less deep. And boom, he’s riding a bike with saw blades.

I shouldn’t have to say this, but don’t try this at home. No one wants to see what would happen if you slipped off the back of the bike or tossed over the handle bars. But, if you want to see The Q on his Ice Cycle, watch this video.