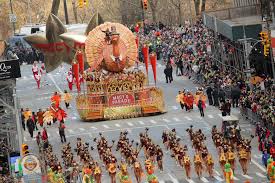 Macy’s is still having a Thanksgiving parade this year. But, you’re not allowed to attend. Nor is anyone else. They’re planning on a TV only parade. New York Mayor De Blasio says that it’s not going to be the same parade we’re used to. Changes include balloons being pulled by vehicles instead of being held by people. They aren’t going to follow the traditional parade route. Out of state marching bands won’t be allowed this year. But they will have local musical performers. All in all, they except 75% fewer people to be participating. The good news is that they will still have all the colorful, giant balloons and floats. However, everyone running them will have to stay a specific distance from each other. I’m guessing that’s going to mean no dance performances either. It was also mentioned that it’ll be spread out over two days this year. I’m not sure how that’s going to play out. Thanksgiving and the parade are November 26th this year.