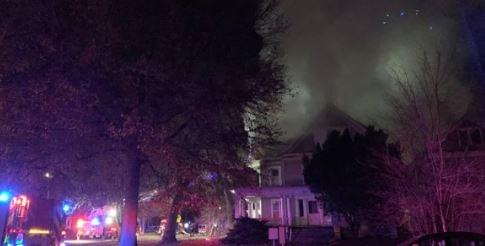 Fire investigators will have a tough time determining exactly how the third story of a vacant home near 12th and D streets caught fire Friday morning.

Lincoln Fire and Rescue Spokeswoman Nancy Christ says the blaze was reported just after 3 A.M and took L.F.R crews hours to extinguish due to, among other things, tall trees nearby that for a time prevented ladder trucks from getting too close.

Christ says the inspector assigned to the fire, Inspector Damon Robbins, can’t even access the third floor due to a collapsed staircase.

“Because of the collapsed zone within the structure, it’ll be difficult for him to really determine a cause, because he can’t get up to that third floor at all,” says Christ.

Though the cause of the fire may not be known for some time, Christ does note that the home did have a record of being a shelter for squatters. She says police had to escort squatters from the home as recently as Wednesday.

Christ says the home is a total loss. No injuries were reported.

Lincoln Fire and Rescue Crews are fighting a house fire near 11th and D Streets this morning.

Lincoln Police Captain Ryan Dale tells KLIN News the fire was first reported a little after 3AM and crews are still trying to contain it.

Dale says the house is listed as vacant. Commuters are advised to avoid the area.